The Landsat 9 satellite was recently evaluated after launch and is now operational. This event marks the beginning of the satellite’s mission to expand the 50-year-old Landsat record, which captures the earth’s surface, surface water and coastal regions from space.

Landsat 9 was launched on September 27, 2021 from the Vandenberg Space Force base in California. The satellite has two scientific instruments: operational ground thermal imaging device 2 (OLI-2) and thermal infrared sensor 2 (TIRS-2).

Landsat 9 enhancements include higher radiometric resolution for OLI-2, which allows sensors to detect subtler differences, especially in dark areas such as water or dense forests. Thanks to this higher radiometric resolution, Landsat 9 can distinguish 16,384 shades of a given wavelength. In addition to improving OLI-2, TIRS-2 has significantly reduced diffused light compared to Landsat 8 TIRS, which improves atmospheric correction and more accurate surface temperature measurements.

All commissioning and calibration steps show that Landsat 9 works just as well, if not better, than Landsat 8.

As of October 31, 2021, Landsat 9 has collected more than 57,000 images of the planet and will collect approximately 750 images of the Earth daily. These images will be processed, archived and distributed by the US Center for Earth Observation and Science (EROS) in Sioux Falls, South Dakota.

More information at the link. 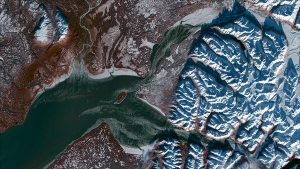 Open land in Ukraine: who and how